Ms Naidoo of Durban got pulled into a bitcoin scam on Facebook. It started small, then quickly spiralled out of control.

Ms Naidoo (not her real name) works in a hospital in the Durban area and, sucked in by the buzz around bitcoin, decided she wanted to make some extra money to supplement her income.

Christopher Mason, it turns out, is a trader with a company called GooTrader.

GooTrader’s website assured Naidoo that it was ‘a legally operating company’ but with nothing to verify this other than a bald statement.

Mason, when not making fortunes from cryptos, spends his time doing this:

Naidoo connected with Mason on Facebook. He offered her an opportunity to make some quick profits with bitcoin: invest R3 000 in bitcoin, said Mason, ship it to an address where he would put it to work in bitcoin “mining”, and she would get R11 000 in a matter of weeks.

In November last year, Naidoo purchased R3 000 worth of bitcoin through the Luno crypto exchange and sent it off to the address supplied by Mason.

Sure enough, a few weeks later she had R11 000 deposited into her Luno account.

Satisfied that her first investment worked out so well, she was game for another round.

All of this was used to buy bitcoin, again through Luno, with an instruction to send it off to a “GooTrader” bitcoin wallet, or what Mason called a “trade link” account.

This time, Naidoo and her friends stood to make an unbelievable R800 000 from their investment, also within a matter of weeks.

If that sounds too good to be true, it was.

When the “investment” fell due in early March this year, Naidoo and her fellow investors could hardly wait to get their hands on the promised R800 000.

Still there was a problem. Because Naidoo had taken so long to pay the “tax”, Mason now informed Naidoo that she needed a withdrawal PIN to get the money released.

And, bad news for Mason, his bosses were so upset with him about the delay in receiving the tax that Naidoo’s account had been handed over to “Anderson”.

Here’s how it went on WhatsApp:

Mason: Once you have deposited the money to your Luno, let me know okay so I’ll guide you okay

Naidoo: Ok, I have to send it (the bitcoin) to the trade link?

Mason: Yeah, but not that link okay, it has to be the direct link for the pin. Let me send it to you.

Mason then sent a bitcoin wallet address, and Naidoo duly shipped the bitcoin to Mason’s bitcoin “wallet”. At that point her bitcoin was gone.

I decided to hop onto GooTrader to see if I could make any sense of what happened. I opened up a chat box and in no time “Bruce” was on the other end.

Me: Is this for real? Can I speak to Marco Verratti (one of the directors listed on the website)? You say there is 100% chance of NOT losing money. How so?

Bruce: Sir, you can get directive from any of our officers okay. There is not (sic) way you are going to lose your money because you alone will have access to your trade account….You have to trust the platform okay, so a start (sic) I’ll advise you to start with the minimum amount so you’ll be able to see how it all works okay.

Bruce: Ma’am it all depends okay… Only when you exceeded paying COT (sic), it will not have to pass through SARS verification if found hugh (sic) honestly you’ll be asked to pay Tax.

Me: How much is the cost of transfer?

Me: Must I send bitcoin and to which address?

At this point I had had enough of Bruce, or Mason, or Anderson, or whatever his name is. His use of “okay” in virtually every sentence is a dead giveaway that this is the same person.

An image search of Marco Veratti, a supposed director at GooTrader, shows the same photo popping up in dozens of other lookalike schemes. 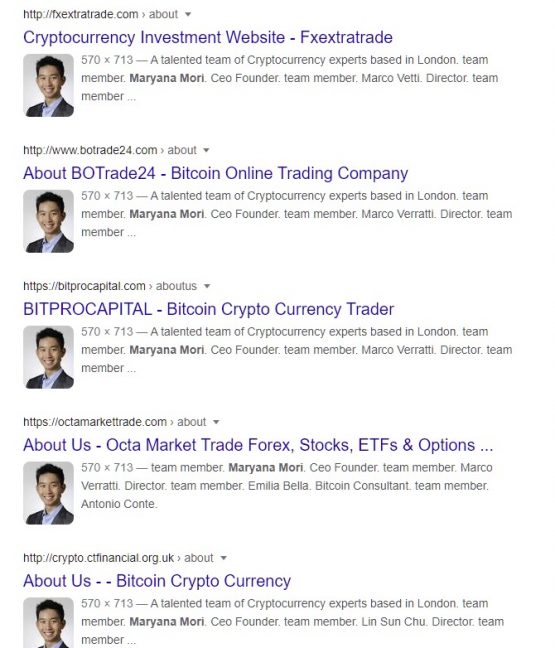 There is a sad ending to this story in that Naidoo is now considering going under debt review to claw her way out of the hole she dug for herself.

Signs of a scam

There were red flags all along the way that Naidoo missed.

The Financial Sector Conduct Authority (FSCA) has been alerted to GooTrader and says it will be issuing a public warning. It seems “Mason” or “Bruce” or whatever his name is operates out of Florida in the US.

Ironically, had Naidoo bought and continued to hold her bitcoin at Luno, her investment would now have made her more than 100% gains since December 2020.

A look at Mason’s Facebook page (which we will not supply) suggests numerous South Africans are about to take the same tragic steps as Naidoo.

“I would laugh if it was not so tragic,” she says.

According to Brandon Topham, head of enforcement at the FSCA, which issued a health warning on cryptos two weeks ago: “… it seems these people are foreign and even if local, the chances of you receiving anything back ever is less than 0.000000000000001% unfortunately.

@Rand4dollar – bitcoin is real it has saved a lot of people after and before covid. You should never trust anyone who promises such a huge amount of returns. Blockchain offers such investment as well at 4% or so and i think this is reasonable! These days people are greeding. All that glitters is not gold. Life is a process!

if you wish to make investment online do not invest what you can’t afford to lose.

Anyone can trade bitcoin simple by buying and holding it for years not just for weeks due to the market movement.

Look for a reliable wallet provider that would offer you a wallet address and as well opportunity to have your own private key so incase the company fold off you can still have access to your coins.

Do you have similar experiences or suggestion? Please use the comment box below, you might save a soul from perishing.